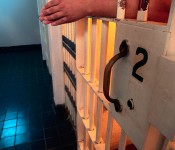 Dealing with the Past, Pt 1

Before you were born you only had a future. The second you were born you had a present and a future. The second after that you officially had a past, present, and future. The past, present and future are the tenses of our lives, and we have struggles with all three. We can be discontent with the present, we can worry about the future, and we can be bound up by our past. The past can be a virtual prison for some of us that threatens to never let us go free. It hinders and effects our present and leaves little hope for our future. The only thing that we have to look forward to is continual bondage from the past. In this series of articles I want to give some help to those who have struggles with their past. END_OF_DOCUMENT_TOKEN_TO_BE_REPLACED

The Tragic Story of Judas, Pt 5

Jesus interrupted the meal to announce that one of the twelve was going to betray him. The eleven genuine disciples became unglued and each began to inquire if he were the one. This also included a discussion among the disciples as to which one of them it could be (John 13:22). It appears that none of them had the slightest reason to suspect any specific man. However, Peter, in usual form stepped up to the plate and discreetly put another disciple up to asking Jesus to identify the betrayer (John 13:23-24).[1] So, reclining on Jesus’ chest, within inches of his ear, John asked the question, “Lord, who is it?” (John 13:25 NAS).  END_OF_DOCUMENT_TOKEN_TO_BE_REPLACED